Trait Theory of Leadership and Its Key Characteristics

March 5, 2016Lee Candy
The trait theory of leadership is an early assumption that leaders are born and due to this belief, those that possess the correct qualities and traits are better suited to leadership. This theory often identifies behavioural characteristics that are common in leaders.

Trait theory of leadership is one of the first academic theories of leadership and attempts to answer why some people are good leaders and others are not.

In fact the theory can be traced back to the nineteenth century, whereby a man called Thomas Carlyle used such understanding to identify the talents, skills and characteristics of men who rose to power.

The trait theory of leadership is based on the characteristics of many leaders – both successful and unsuccessful – and is used to predict leadership effectiveness. The resulting lists of traits are then compared to those of potential leaders to assess their likelihood of success or failure. Once found, the theory is that these natural leaders can then be nurtured to become great leaders. 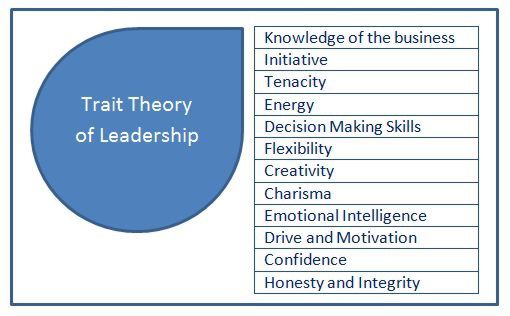 Some of the most common leadership traits identified, are:

Traditionally, the most ardent versions of trait theory see these “leadership characteristics” as innate, and as such, some people are seen to be ‘born leaders’, due to their psychological makeup.

Proponents to this theory, which is now considered largely out of date, believe that leadership development consists of identifying and measuring leadership qualities, screening potential leaders from non-leaders, and then training those with potential.

In fact, modern thinking suggests that the above traits are little more than characteristics, which although some people can possess them naturally, can be learned, and built into one’s behaviours and thinking, thus affecting their leadership potential.

In tandem with modern day thinking, leadership is seen as a skill to be mastered and therefore, the above characteristics can all be honed. As a result, it is prudent to first understand these ‘traits’ and then develop areas of weakness, in order to become a great leader yourself.

How to Use Trait Theory of Leadership:

Step 1: Identify the typical traits of good leadership above, and start identifying where you believe your strengths and weaknesses are.

Step 2: Take the Trait Theory of Leadership Survey yourself.

Step 3: Share this survey with five other people in your team and whom know you as a leader, and get them to complete the assessment on how they perceive you as a leader.

Step 4: Submit all these findings and analyse where the gaps between how you see yourself and how others do too.

Step 5: Discuss the findings with the group and agree where you can improve.

Step 6: Develop a simple action plan of no more than 6 items to help improve your skills.