5 Whys is a simple problem solving tool that can have a dramatic impact on helping you get to the root cause of problems. 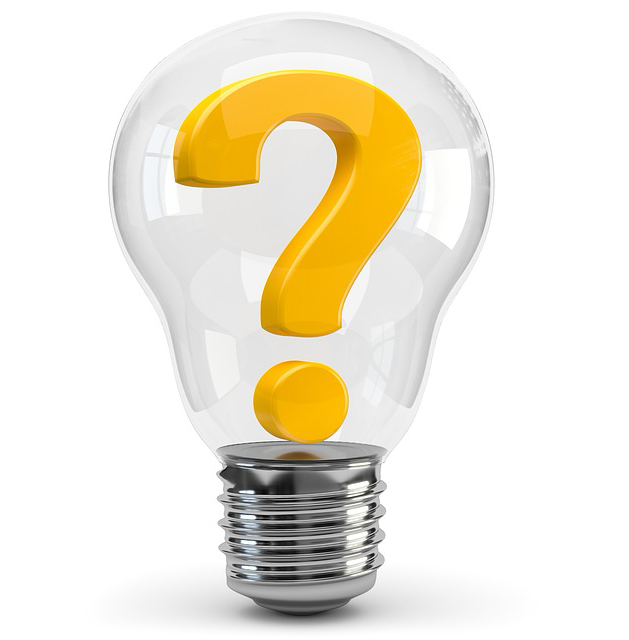 Often, when we encounter a problem, we paper over the cracks by reacting to it, and creating a work around.

You know, the, “just give it to me…” or the “check every single item from now on” or “keep adjusting it until it’s right…”

And in the heat of daily operations, we just make do. We force work through, firefight and try to do the best we can.

But opportunities to solve the real problems get missed.

This scenario is so common, it cripples teams and businesses.

But what really happens when we just get the task done, whilst paying little attention to the root cause?

The problem comes back.

Sooner or later, it raises its ugly head and returns again.

And what do most businesses do? Because they are busy and under pressure…

…out comes the bandage again and we do what we need to do to get the task done again and move on.

Another opportunity then goes by to do the right thing…

And in the worst of cases, it happens over and over again.

Focus on the Cure, Not the Symptoms

Sometimes, we do try to stop and focus on eliminating that pesky root cause, but are then typically guilty of focusing on the wrong things and missing it altogether.

In other words, we tackle the symptoms of the problem rather than the thing that caused it.

For example, for a few years I endured an aching upper back. Right between the shoulder blades, I had this horrible aching feeling, which used to get worse.

When I went to the chiropractor, he examined me and then every week, would complete the same process.

He would put me into a few positions, and crack my back.

He would then apply what I can only describe as a tens machine that fired gentle electrical stimulation into the muscles, to ease them.

And it worked. My muscles would feel free and loose again, with no pain.

The problem is that it lasted literally a day and the problem would go back to normal.

And I would follow this process every week. I did this until the penny dropped.

I was literally throwing my money down the drain, because I was paying a guy to address the symptom of my problem, NOT THE ROOT CAUSE.

And so I figured it out myself.

I identified that my posture (particularly at my desk when working) was terrible.

I spent months, retraining my body to adopt a new posture when sitting and standing, and eventually the pain subsided.

No more paying a chiropractor to click my back every week for a short term feel-good factor.

I had addressed my own root cause and got to work to address it.

Now I have a healthy back again!

The same principle is true in the workplace – How many problems have you and your team encountered that haven’t been fully addressed?

And if you do attempt to eliminate them, do you see how easy it is to focus on the wrong thing: More so the symptoms rather than the cure?

5 Whys is a tool that helps identify these root causes.

But before we understand more about 5 whys, let’s first look at what a problem is.

A problem is simply a gap between the current situation and the ideal or intended state. 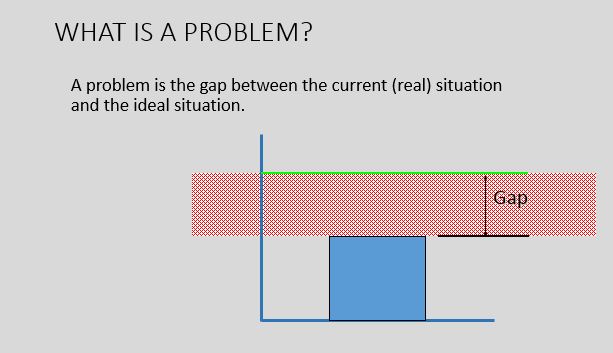 It’s a deviation to what you expect.

And when there is a deviation, you have a ‘problem.’

So, rather than attack the symptoms or worse still, create work-arounds every time a problem happens, why not take positive action to..

When you can find the real cause, you can eliminate it, so you can really put the problem to bed.

This simple act of using 5 whys to improve your team’s performance, can have a drastic effect on productivity and output, and dictates how much time you spend firefighting and how much time you are proactively managing.

Time to be a Kid Again!

At the root of this 5 why methodology, lies a simple trick.

Think of a child continually asking why, over and over again… For those who’ve been the recipients to this, tedious as it may have seemed, it in fact teaches us a great lesson:

If we repeatedly ask why, we can drill down with clarity and efficiency to understand a concept (or problem).

And that’s all you and your team have to do – ask questions like a child, and keep asking ‘why’ to a problem until the root cause is exposed.

Sometimes, you may only need a couple of whys.

Other times it may be a little longer to get to the root cause.

But start with the problem and clearly define it.

Once you do, it’s a mere matter of asking questions over and over, until you come to some logical root cause.

This simple framework can be extremely powerful in its approach.

And whilst you will still need data to back your opinions up, the 5 whys can provide clarity on what to focus on and investigate further, in order to cure a problem.

In a large company I worked at as a Business Improvement Leader, there was an instance where lots of scrap was reported from the previous day’s production on a particular machine.

The operator pushed the emergency stop button by mistake during a run.

When I asked why, the answer I got from a senior /manager was: “Operator error.”

I then asked why was it an operator error? “Because it happens now and again,” he said with a frosty reply.

I then said that, “I don’t buy that answer. How can we error proof the process so the operator doesn’t get blamed and also so we don’t make the same mistake again?”

I asked again, “why did he hit the emergency stop? Let’s have a look on shop floor.”

We went to the machine and found that the start and stop buttons were worn to the point that they had no colour to distinguish between the two and the labels were non-existent.

More so, the buttons were so close together that it was too easy for the operators to reach out and push the wrong button by mistake. Especially in their current un-marked state.

Here’s the answer, when we stood there brainstorming the 5 whys by the machine:

PROBLEM: There was excessive scrap on the process line from the previous shift

The operator pushed the stop button instead of the start button by mistake, during the run.

Because the buttons on the control panel are unclear and worn and hard to distinguish between the two.
The stop button is right next to the start button, making it easy to hit the wrong button, when the operator is reaching out to the control panel.

ANSWER and counter measure: Order a new control panel and buttons and move the emergency stop away from the start button, so it’s not easy to press the wrong one by mistake!

By asking why, we went from the problem being an ‘operator issue’ and almost dismissing it as one of those thing…

– order a new control panel and buttons.
– Move the stop button away from the start button.

See how easy and effective it is?

Don’t Do It Alone…

The 5 Whys is a simple and effective tool, but word of warning.

DO NOT ATTEMPT IT AT YOUR DESK.

DO NOT DO IT ON YOUR OWN!

Problem solving should be completed by a team, as well as those running the process.

Why? Because it encourages everyone to adopt the 5 whys methodology when problems are encountered. It forms new positive habits of fixing problems when they happen.

It also brings the team together to work on solutions (which helps develop that teamwork approach).

Just as importantly, the best sessions are those that contain a group of cross functional team members.

Each team member can contribute by providing their own perspective and ask questions that perhaps other people from other angles would otherwise not have asked.

So if you’re in a production company, you could include the quality manager, the process engineer, the operators on both shifts, the operator in the next process and then brainstorm 5 why questioning.

If it’s a service business, perhaps include the staff that performs the task, and so too the staff members in the next process step that they pass the work onto. Include to the IT expert, the quality manager, and anyone else that will help provide a different angle on things.

Don’t have a team of 15-20 people. Try to stick with a handful of people, but enough to get in, analyse and move on with some actions.

These sessions should be to the point; get in and get out with agreed actions and next steps.

Your 3 Step Plan to Implement 5 Whys

Step 1: When you have identified a problem, focus on creating a clear and concise problem statement – What is going wrong, when did it happen, where did it happen? Who found the problem?

Step 2: Then work backwards, asking why every time. Focus on getting to the root cause and look for process or system failures. These are often the real root causes. (operator/staff error is a cop-out. Instead try to find process failures that ensured the operator made an error).

Step 3: Remember, when conducting the 5 Whys exercise, keep in mind that a bad process will beat good people every time, so focus on the process issues, not people. It sometimes helps to ask ‘Why does this process fail?’ after every question, to keep on track. 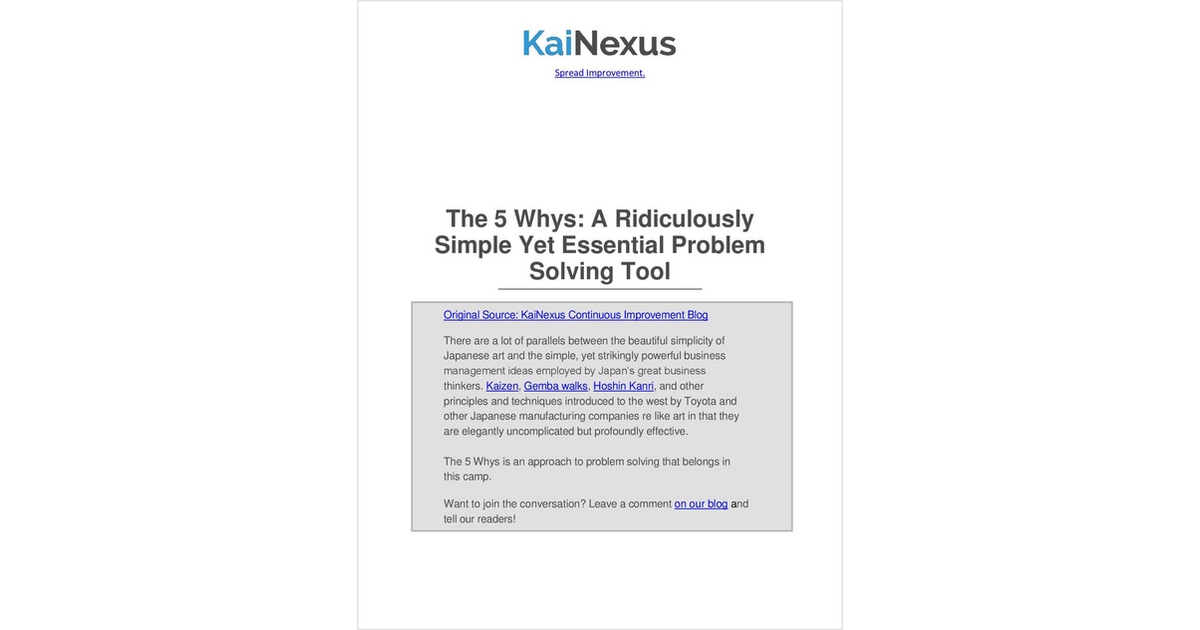 Previous postWhat are the Critical Six Sigma Tools?Next post7 Steps to a Fishbone Diagram and to Identifying Those Causes
Join the VIP List
(It's FREE)